How can God punish Adam for something as insignificant as biting into a fruit?

Jesus-Islam » Morality » How can God punish Adam for something as insignificant as biting into a fruit?

What is so bad about eating the fruit?

It was not the fruit that made this act serious, but the fact that by eating it they expressed what they thought of God and how they behaved towards Him.

First, God had generously given them food from all the other trees in the garden. It was easy for them not to eat this tree precisely because all the others were for them. But to eat of that tree was to say, “God was not good to us. God is holding back something.”

Secondly, God had only forbidden them to eat from this one tree. To eat the fruit was to say, “I do not have to obey God. He’s not my leader! He is not my Lord! ”

Third, God had warned them that by eating fruit they would die. Adam knew the words spoken by God. In fact, by disobeying God, he expressed this: “God is a liar. I do not believe that. ”

Fourth, God was Adam’s friend, walking and talking with him in the garden. When Adam ate the forbidden fruit, it was as if he had said, “I’d rather have a piece of fruit than God. I love the creation of God more than God Himself. Fellowship with God is of no great value.”

Fifth, God was not only the Creator of Adam, knowing what was best for Him, He was also his teacher and guide. But Adam has come to considered he could decide what was best for him and what would make him wise. His action shouts loudly: “I do not want to listen to the wisdom of God. I have my own wisdom. ”

This one act betrays a whole series of attitudes and motives: selfishness, arrogance, wilfulness, rejection of God, loss of love for God, and more. We see that eating a small fruit in this case is a serious insult to God. Through this one act, Adam refused to acknowledge the goodness, authority, truth, worth and wisdom of God. He literally rejected God and broke the covenant that existed between them. It is the same attitude we have in our lives today. It was right that God punish Adam for this sin.

It is in this light that we can appreciate the promise God made to Adam and Eve in Genesis 3:15

This is the context recorded by the prophet Moses (Genesis verses 9-21):

Then the LORD God called to Adam and said to him, “Where are you?” So he said, “I heard Your voice in the garden, and I was afraid because I was naked; and I hid myself.”

So the LORD God said to the serpent: “Because you have done this, You are cursed more than all cattle, And more than every beast of the field; On your belly you shall go, And you shall eat dust All the days of your life. And I will put enmity Between you and the woman, And between your seed and her Seed; He shall bruise your head, And you shall bruise His heel.”

To the woman He said: “I will greatly multiply your sorrow and your conception; In pain you shall bring forth children; Your desire shall be for your husband, And he shall rule over you.”

Then to Adam He said, “Because you have heeded the voice of your wife, and have eaten from the tree of which I commanded you, saying, ‘You shall not eat of it’: “Cursed is the ground for your sake; In toil you shall eat of it All the days of your life. Both thorns and thistles it shall bring forth for you, And you shall eat the herb of the field. In the sweat of your face you shall eat bread Till you return to the ground, For out of it you were taken; For dust you are, And to dust you shall return.”

And Adam called his wife’s name Eve, because she was the mother of all living.

Also for Adam and his wife the LORD God made tunics of skin, and clothed them. 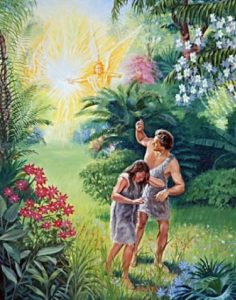 In these verses we see the seriousness of sin, but also a promise that ‘seed’ of Eve would crush Satan, but that Satan would ‘bruise his heel.  But we also see that while Adam and Eve tried to cover themselves with something they made from leaves, God made them clothes and coverings from an animal skin. The animal died and they as sinners were covered. It is the first promise concerning the Messiah, and the first picture showing what He would do. His ‘covering’ would be given to cover the sin and shame of men and women. They cannot make amends for their own sin. The sacrifice died. They were covered.

Those who know the rest of the Torah and the writings of David and the prophets, know that this theme of a sacrifice needing to die so that sinners can be accepted, prepares the world to know that God treats even one sin so seriously that we do not need a teacher to tell us to try harder and do better. We need a Saviour who will pay the eternal penalty for our sins.

The Torah prepares us for the Messiah who was the Lamb of God. Our is covered by His perfect and sinless righteousness as we trust Him.