One day, God asked Abraham to sacrifice his son. He was to go to a place, a mountain, which God would show Him. 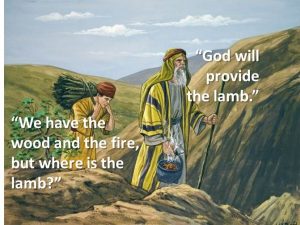 When he came to the place of sacrifice, his son asked him where the lamb was for the sacrifice. Abraham answered him that God would provide the lamb. However, he then bound his son, and put him on the altar over the wood. As he stretched out his hand to sacrifice it, an angel of the Lord called to him from the heavens, summoning him to do no harm to the child.

Abraham looked up and saw a ram behind him caught by its horns in a bush. Abraham took the ram, and offered it unto the LORD in place of his son.

God had himself provided a substitute in place of his son who was to die. Instead of his son dying, it was the ram.

This act foreshadows the death of Jesus. God sent him as a substitute to take the place of us as condemned sinners. Therefore, when Jesus came to him, John the Baptist (يحيى) that prophet pointed to him and said, “Behold the Lamb of God who takes away the sin of the world” (The Bible, 1 John 1:29)