Jesus-Islam » His mission » The cross … madness?

Many people think that speaking about a man who got himself crucified, and then saying He is the Lord and Saviour we need is a complete folly. However, one early Christian wrote:

We preach Christ crucified, to the Jews a stumbling block and to the Greeks foolishness, 24 but to those who are called, both Jews and Greeks, Christ the power of God and the wisdom of God.
1 Corinthians 1: 23, 24

Let’s try and understand this.

One day, wishing to return home, a little girl got lost in a neighbourhood in London. Overcome with distress, she began to cry. A policeman who passed by saw her, came to her and asked her if she remembered the name of the street where she lived. The girl replied, “I do not know the name of the street, but my house is near the building that has a cross on the roof.”

The policeman understood that the building with a cross on top would be a church. As there was only one church in the neighbourhood, he was able to help the little girl find her home. The cross had served as a reference point. 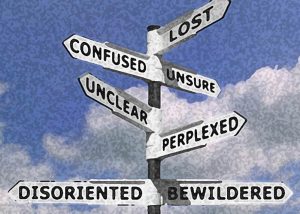 I saw a movie about airline pilots the other day. The commentator explained that once on board the pilot must depend entirely on the guidance devices (radars) on the ground. The pilot must not rely on his personal instincts. Night or day, he or she must absolutely follow the signs and instructions of the instruments of the board, otherwise it will lead to disaster. We could easily cite other examples to illustrate how weak and easily misled we can all be.

Modern man prides himself on his unprecedented scientific achievements. He places his trust in his material goods. He is proud of his independence and intelligence. But in the eyes of God man is poor and miserable. Mankind’s fundamental problem cannot be solved outside the cross of Jesus Christ.

Speaking of his death, Jesus knew the place where he would suffer: up high on a hill, so that the whole city could see him. His death was not a miscarriage of justice, nor a merited punishment, but the fulfilment of precise prophecies concerning the Messiah. By dying on the tree set up on Mount Calvary, Jesus Christ took the sin of all men upon him. What we cannot get by our own means, Jesus got it for us. He confronted death for us and defeated it. On the third day after his death, he came out alive from the tomb which had been sealed by a large stone. This is why the cross of Jesus is there as the landmark in time and space, the compass that leads to true peace and eternal salvation.

The river of history flows: the cross remains. When the strong torture the weak, the rich despise the poor, when the wretched die in misery, mothers beg for bread weeping for their starving children, when the innocent suffer in the prisons, when the soldiers go out to battle, when those who are in darkness look for the light, the cross is always there for those who put all their faith in Jesus Christ. His cross, what it means and accomplished is the sign of the power of God, wiser and stronger than men.

Why do Christians throughout the world believe in a crucified Christ? It is because, at the time of Jesus’ death, four things were accomplished:

In the Holy Bible, this word means that a sum of money has been paid for the redemption of a slave. It is the release of the person who is held in slavery or in prison. The redemption was practiced among the Romans in the time of Jesus as in antiquity. The very words of Christ show us that his mission in the world was a redemption mission by means of a ransom. He declared that he had not come to be served, but to serve and give his life as a ransom for many. He saw men bound to Satan, chained by their own lusts, slaves of evil. And in an extraordinary way, of which God alone has the secret, Jesus paid the price for the liberation of man by dying on the wood of Mount Calvary.

Atone or expiate is the translation of the Arabic verb “Kafara” (Takfir), which means to cover. Its meaning is wonderful, beyond the reach of ordinary man. This word means that on the cross Christ responded to the requirements of the moral law for the whole universe and that he took the sin of men upon himself. The principle of the law is that evil must be punished. The principle expressed in the Holy Bible repeatedly is: “God will never clear the guilty.” Yet the Injil tells us that although we know that all men have sinned and have fallen short of the glory of God, we can be freely justified by His grace, through the redemption that is in Christ Jesus.

The Holy Bible affirms that all men are enemies of God by nature. Yet it goes on to say that while we were still sinners, that is, enemies of God, Christ died for us, that we might be reconciled to God. To be reconciled is to be brought back into a perfect relationship with God. There is only one condition for us to be reconciled: God calls each one of us, to abandon our sin and to accept in all humility that Christ in his love can assures us of reconciliation with God.

This is what God works for us. The Bible teaches that even if God is a God of love and mercy, He is also a God of righteousness.

Man has violated the law; he needs more than forgiveness, more than purification; he needs the grace of a new life. He needs to be placed in the presence of God as if he had never sinned. That is justification. To be “recreated” as righteous before God is more than being forgiven. The word justification means for me to be as if I had always been innocent.

So for those who believe this blessing flows from the much-maligned “cross”. It has no magical power in itself, but it is of paramount importance insofar as it is the sign of what Christ has accomplished, once and for all, for all of us.

For you, it will have its meaning only if you receive Christ as your Saviour. You too, in our troubled world, may possess a peace that surpasses all understanding and joy that can not be taken away from you, if you put your trust in the love of God made known clearly on the cross in Jesus Christ. -Christ, and Jesus Christ crucified. Is it madness ? No, a thousand times no, this is, on the contrary, “the wisdom of God, mysterious and hidden, which God, before the ages, had destined for our glory”