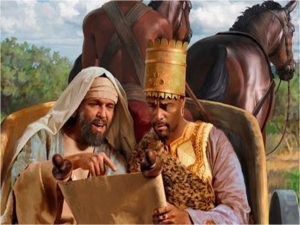 Philip, the Jew, wins an African to Christ, (the Ethiopian Chancellor) long before any European heard the gospel. Read it in Acts 8:26-39

Far from being a Western religion, Christianity was born in the Middle East, far from Europe, but very close to Egypt and North Africa.

Jesus himself was a Jew, brought up in Nazareth. It was only 15 years after his death that the gospel entered Europe for the first time. However, long before Christianity took its place in Europe, there was already a strong and established Christian community in North Africa.

Many of the prominent Christian thinkers of the time were north African according to the history of the church.

To date, there are millions of Christians throughout the world who do not have white skin. This is why we vigorously oppose this false impression which makes us believe that Christianity is a Western religion.