What does history tell us about the death of Jesus?

Jesus-Islam » His death » What does history tell us about the death of Jesus?

History confirms the crucifixion of Jesus.

There are non-Christian writings, contemporaneous with the time of Jesus, dealing with the question of the person and the crucifixion of Jesus as historical events.

Flavius ​​Josephus, was Jewish historian of the first century AD 37-100 who lived in Judea and so had access to reliable information about Jewish history and traditions. While he was unconnected with the Christians and had no reason to write anything that agreed with the narrative of the Gospels, Josephus wrote in his “Jewish Antiquities”: ”

About this time there lived Jesus, a wise man, if indeed one ought to call him a man.  For he was one who performed surprising deeds and was a teacher of such people as accept the truth gladly. He won over many Jews and many of the Greeks. He was the Messiah. And when, upon the accusation of the principal men among us, Pilate had condemned him to a cross, those who had  first come to love him did not cease.  He appeared to them spending a third day restored to life, for the prophets of God had foretold these things and a thousand other marvels about him.  And the tribe of the Christians, so called after him, has still to this day not disappeared.
– Jewish Antiquities, 18.3.3 §63

Lucien, a Greek writer of the 2nd century, gave a mocking comment about Christ and the Christians. He did not at all understand the true nature of the Christian faith, and was astonished that they were ready to die for their beliefs. For him, it was people who were deceived and were therefore, eager to live for the afterlife rather than enjoy the pleasures of the present world. He spoke about Christians in these terms:

“These Christians worship a man – one who is honoured in Palestine, where he was crucified for introducing this new worship among men … The first legislator [Christians] still persuaded them that they are all brothers. As soon as they have once changed their religion, they renounce the gods of the Greeks, worship the same sophist crucified, and live under his laws. “

At the British Museum in London there is a Syriac Manuscript, dated 73 AD (no. 14658), which testifies to the death of Jesus. It is a letter written and sent by a Syrian named Mara Bar-Serapion, to his son Serapion. While in prison, he encourages his son to pursue wisdom, stressing that those who persecuted the wise have had problems. He takes as an example the dead of Socrates, Pythagoras and Christ. About Christ he said, “What advantage did the Jews derive from the execution of their wise King? ”

Phlegon, another early Roman writer of the second century, testifies to the death and resurrection of Christ in his “Chronicles,” saying, “Jesus, while he was alive, did not seek to save himself, Is risen from the dead, and showed (to his disciples) the traces of the punishment which he suffered; He showed them his hands and feet pierced by the nails. ”

Under the pen of Cornelius Tacitus (55-118), considered the greatest historian of imperial Rome of the first century, we read: “The name of a Christian comes to them from the name of Christ, who, under Tiberius, was delivered to execution By the Procurator Pontius Pilate. ”

We have here mentions gathered from sources other than the Bible and which are very clear on the death of Jesus! The crucifixion of Jesus is an event well known and attested by history. The historians of modern times are unanimous in retaining: Jesus was crucified. In one of these books, Abbas Mahmoud Al-Akkad, a highly respected Muslim Egyptologist and scholar, confirms that we can rely entirely on the narrative of the four Gospels of the Bible (Matthew, Mark, Luke, and John) Which he considers to be faithful accounts of what happened to Jesus. 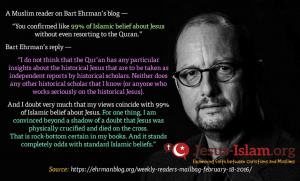