What is the solution to the problem of my sin?

Jesus-Islam » Salvation » What is the solution to the problem of my sin?

Is there a way out?

Many are trying to fill the void between God and themselves by their own efforts. Some think that they can approach God by being good people, or religious. They hope that their good works will counterbalance their sins and give them access to paradise. But all this is useless, because no one is perfect. It is not that their contribution to pay for their sins has almost-but-not-quite reached God. No! the reality is that they have failed miserably with regard to his demands. We will never reach His standards through our own efforts. No matter how righteous we seek to appear, we are condemned by the Word of God who says in the Injil: “Whosoever keeps the whole law, but sins against one commandment, become guilty of all” (James 2:10). Our sins will never be forgiven if we rely on our own righteousness. The great gulf that separates us from God is too deep, wide and unbridgeable.

The question remains: What is the solution?

One day, in the quiet of an afternoon, I was sitting when my attention was drawn to a horde of ants climbing up and down a wall. They were trying to carry a grain of wheat to the top of the wall, but without success. The grain of wheat was too heavy for them and the pressure of gravity too great. I felt sorry for them and wondered, how could I lend them a hand—the poor ants. If I stretched out my hand to grab the seed, I might crush some of them, or I might terrify them and it would be every-man, or rather, every ant for himself! I then told myself that the best way to help them would be to become an ant like them, while keeping my strength as a man. Then I could help them without frightening them.

In a way, we are like those ants. We can never reach God through our own efforts or good works. The weight of our sins is too great, stronger than our efforts. Sin simply weighs heavily on our shoulders. God has, however, had pity on us, he has come into a human body, like ours, in order to free us from the tyranny of sin. He came as a man but lived without sin; that is what is so different about Him.

We are all sinners while he is sinless. Who is able to restore the broken communion between God and man? Surely, the only one who can fill this void is none other than the Person who is both God and man, namely Jesus Christ.

Maybe religion will help me?

There are millions of people in this world who have not yet grasped the magnitude of the gravity of sin. They are in the dark about the impending Judge. They do not imagine for a moment that they will end up in hell for sins that they have trivialised. They know that they will have to face God after death, but they say that their good religious works will pave the way for them whatever difficulty they may face. And as long as they continue to minimise the weight of their sin, they will deceive themselves thinking they will get away with it cheaply because of their religious devotions.

Such a hope is as futile as that of a man who rows against a current in a raging river. His boat is caught in a very powerful stream of water which carries him at full speed towards a waterfall plunging down 45 metres to jacked and deadly rocks. A passer-by sees him in his desperate struggle and vain efforts. Minute by minute, he is drawn irresistibly to the edge of the falls. The passerby runs to his vehicle, grabs a rope and throws it to him. He cries out, “Grab the rope, I will draw you to the shore.” The man who came to his aid could not believe his eyes. The man in danger in the waters ignored the rope and persisted in continuing his fight against the current of water, until he disappeared into the void.

You see, God in person has thrown us the life-buoy in Jesus Christ. He is the only one who can deliver us from death and hell. But in order for it to be so, we must stop relying on our own efforts and grasp the hand that is being held out to us. Once we abandon our religious “struggle” and put our faith in Jesus, we have peace with God. The Bible declares: “For by grace you are saved through faith. And this does not come from yourselves, it is the gift of God. It is not by works, that no one may boast. ” (Ephesians 2: 8-9). 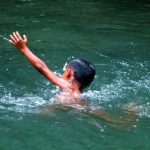 Let me give you another illustration, proof that religion would not save anyone. Suppose that one day you decide to go to a lake and you jump into the water. There, you find yourself in trouble, and about to drown. You are dying and can’t do anything to save you because you can not swim. Desperate and helpless in the face of the situation, you shout with all your might, “Help! Help!”. Someone hears you and says to you: “Hold on. Try to get out. Come on, you can do it!” Isn’t that strange to say to someone who drowns?

A second person arrives on the scene and plunges into the waters. She swims in your direction and says, “Watch what I do, and you’ll quickly learn to swim. Copy me and you’ll soon save yourself.” It’s ridiculous, isn’t? This is not the time to take swimming lessons. The reality is that a man about to drown is absolutely incapable of learning anything.

Then comes a third person. This person dives in and comes to the rescue! The drowning swimmer could always fight against this saviour, but the rescuer is motivated by concern. This person is determined to become a saviour.

To which of these three will this man be most grateful? The third certainly. Religion is pictured by the first two people. By nature we are drowning in our sins. We are in a desperate situation because of our separation from God. Religion tells us: “Save yourself. Do this and that. Do not do this and that and you will be saved. ” Some religious gurus are taken as an example, and to be saved, their followers are asked to imitate their lifestyle. It’s like the second person who plunged into the water, but only to show how much better he was and to demand that the drowning man imitated him. Religion therefore, can not save us. We are desperate. The Bible says that we can not save ourselves. That is why we need someone to dive into the deep waters of our lives, to seize us in order to save us from our sins. That’s exactly what God did. God understands and says, “I know your situation, I know that you are separated from me, I know that you are in a dead-end situation, I know that you can not get away with it, and I also know that to give you laws and commandments, or ceremonies and duties can not save you, for you can not and you will not obey it. You are incapable of accomplishing them. But behold, I have come down to you to deliver you from the tyranny and danger of sin.”

God, therefore, came into this world in the person of Jesus Christ. “Christ also once suffered for sins, just for the unjust, to bring us to God …” (1 Peter 3:18). When Jesus died on the cross, he died as a perfect substitute for us. He has taken upon Him the punishment which our sins deserve. He filled the void that separated us from God. It is not at all wise to reject God’s plan of salvation. What do you think of the man who is drowning and refuses to be helped? He who accepts to be saved by Christ, that is, by believing in his death and resurrection, receives the forgiveness of his sins and God gives him a place in paradise. God pardons, once and for all, the charges against him.