From birth, I was saturated in Muslim culture. At the age of 12, I began practising Islam, the religion of my country and my family, while also severely condemning Christendom.

My aim was then to resemble, or rather, to imitate, as far as possible, Mohammed, the founder of Islam. I often fasted, spent a lot of time in the Mosque, the Muslim’s place of prayer, and daily read the Koran, which I considered a Holy book. I displayed my sincerity and faith by praying to Allah while facing towards Mecca five times a day. I was even more fervent during Ramadan. I dreamed of one day being able to make the trip to Mecca, the holy place of Islam, which is the supreme experience for any Muslim. My faith would have reached its peak.

At the age of 18, I came to France to study Physics, Chemistry and Mathematics at the University of Caen. There I was contacted for the first time by a Christian woman who held a biblical stand at the university restaurant. I saw this only as an opportunity to preach Islam to a Christian! 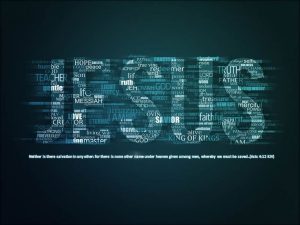 Until then, I knew nothing about the Bible, except that it was “falsified,” or corrupted according to what I had learned as a Muslim. Islam had taught me that Christians made Jesus the Son of God, and for me it was nothing more than an unpardonable blasphemy. So I did not even dare let this idea enter my mind, because it would have led to my eternal condemnation. In addition, the Koran says: “Say: There is one God, he has not begotten, and he has not been begotten, and he has no equal.” (Surah 112) That was enough for me.

Thus, the idea of the sonship of Jesus and his divinity were both swept away at the same time. Jesus was for me a mere man, a prophet indeed, but created of dust in the same way as Adam was. It must be added that everything that the Bible asserts, such as original sin, the Trinity, divine love, salvation by grace, was completely foreign to me.

However, my religion was asking me to believe that the Bible was the Word of God, and yet without taking its teachings seriously. To explain this paradox, Islam claims that the Bible has been falsified by Jews and Christians and that it is therefore impossible to access the true text. I simply believed this assertion without ever having tested its truthfulness.

Time passed, and I attended some church meetings. It helped me to understand the gospel of salvation. The love of God, manifested on the cross, upset me, despite the fact that I acknowledged only one sovereign, powerful God, who had no sympathy or compassion for the sinner. When I was spoken to about this love, I had tears in my eyes, but still I was certain that Islam was the right and the best way.

However, a violent struggle broke out in me. So I decided to study and compare the Bible and the Koran. As I read, I realised that the Bible was completely different from what I had imagined. Above all, the image I had of Jesus in my mind was quite false.

From being a total stranger, Jesus became a unique man to me! Who, like him, comforted the poor, welcomed rejected men, dressed the wounds of all the oppressed? Who, like him, spoke with simplicity and the beauty of God who loves the unfortunate, and takes the side of the humiliated? But above all, who, like him, has revealed God, the Father of all those who place their trust in him?

After this research, I began to have doubts about the falsification of the Bible, but I could not yet believe in the Trinity, nor in the divine sonship of Jesus, much less in his crucifixion. Indeed, Islam simply denies that Jesus was crucified.

Another thing that kept me from believing was my family. To convert and leave Islam is to deny one’s family and one’s country. The price seemed too high. It was always that I leaned to the side where my family, my friends, stood in the balance. It was at the end of two years that I was no longer able to bear to hear about the Gospel, because it frustrated me. If I talked with friends, it always ended in arguments.

Although I rejected the Gospel, I liked to spend time with the pastor’s family. Monday, August 5th  was a day like so many others at home. Of course, I still had to hear the Gospel. I had more and more difficulty resisting the love of Christ, but this time I decided it was too much, and that I never wanted to hear about Jesus Christ again! I insisted that they took me home.

To calm myself, I took the Koran and began to read it. The words came from my lips, but my heart remained dry, so different from my normal reaction. So I decided to go to sleep. It was two o’clock in the morning. In my bed, I begin to pray to Allah, as I did every night, but the silence around me was like an empty void.

Despite all that I tried, I could not find the peace of heart that I desired so much at that moment. Suddenly, driven by an invisible and irresistible force, I exclaimed: “God, whoever you are, reveal yourself to me!”

It was then that the name of Jesus began to come to my mind, and then fill my whole being. I so sensed the presence of someone that I asked, “Is it you, Jesus?” I asked the question without consciously thinking of it. “If it is you Jesus, I accept you,” I added. I cannot describe my emotions at the time. I knew that Jesus was truly from another world, that is, I knew He was from God. But I couldn’t accept it. So immediately, I start shouting: “No, no, no …”, because I realised I was thinking and saying something that completely turn my life upside down. However, I couldn’t escape the name of Jesus, and it was as if He was present with me there. I slowly went downstairs to go and phone the pastor. It was 2:15 in the morning, as I hesitantly and mechanically dialled his number. “I must speak to the pastor!” I said to his wife. I didn’t give any details as to why I was asking them to come and see me in the middle of the night. They told me later that, because of the tone of my voice, they thought I was having a nervous breakdown.

I sat at the back of the room when they arrived. Seeing the pastor, I fell into his arms! Quickly, he asked me what was going on. I answered sobbing, “I must accept Jesus in my life!” I was so distressed that I couldn’t really walk. Once I was seated, he repeated his question to me because he did not understand my request. I repeat to him that I want to accept Jesus Christ in my life. On hearing this, a smile spread across his face. I knew the plan of salvation very well, but now I wanted it to become a reality in my life.

The pastor asks me if I believe that Jesus is the Son of God and is truly God. “Yes, I believe so,” I replied. “Do you believe, Jamel, that Christ died on the cross for your sins, and that He is risen to assure you eternal life in Him?” “Yes, I believe it!” “To all who received him,” continued the pastor, “to those who believe in his name, He gave power to become His children. Do you think he can make you his child?” “Oh yes, I believe it!” We knelt in prayer, and I have received Jesus Christ in my life, as my Savior and Master. Peace flooded my heart. It was a peace I had never known before! Finally, I addressed God as my Heavenly Father, thanks to Jesus who was crucified and raised from the dead for me.

I have not mentioned the problem of sin during this testimony. But I must do it now so that everyone understands that this is the heart of the problem in any religion. How can a defiled, wicked, unworthy person stand before God? The sense of sin has always tormented me. My efforts to satisfy the requirements of God were futile. How could I have obtained forgiveness for unspeakable offences? Only Jesus Christ could make the unthinkable possible, that is, that God would open his arms to welcome me in His grace and love!