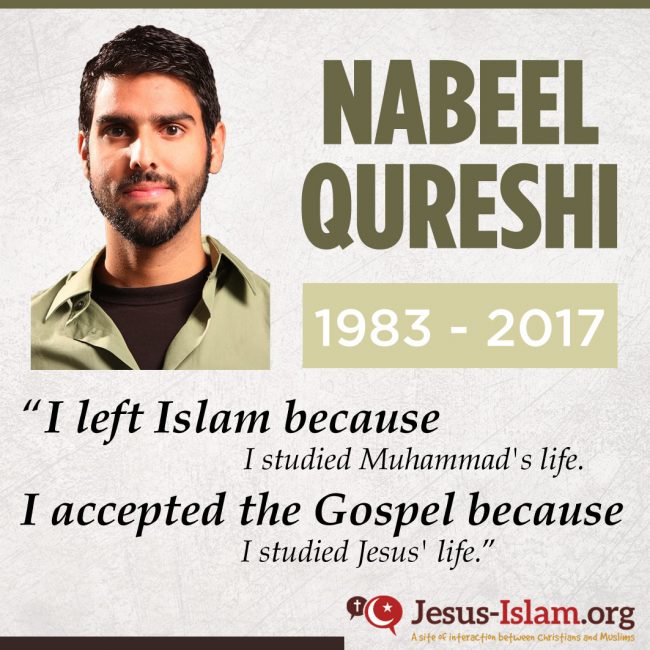 With Qureshi’s passing, the modern church has lost a powerful voice. Nabeel’s loss is felt keenly by those who move in apologetics circles. It also raises again the familiar ‘why?’ questions: Why wasn’t Nabeel healed? Why was his life – so full of promise – cut short? These are questions we all wrestle with at some point, and there are no easy answers.

I can see that I have much room to grow in my faith, because to me, Nabeel’s death seems such a waste. In my limited, fallen perspective, I see what I imagine could have been. Nabeel could have been miraculously healed; that healing could have caused many Muslims to marvel and convert; he could have had an even more powerful ministry and story; he could have continued writing, speaking, and touching lives. In my weakness, I wonder why these things were not to be; why dying was the path he was set to take; and how death could possibly be for the good of anyone involved. We think we know better than God.

Just like the rest of us, Nabeel inhabited a world which groans under the weight of evil and suffering. We don’t know why God didn’t heal Nabeel. We are finite and God is infinite. The good news is that God’s character and power guarantees that He will bring good from evil “to those that love Him and are called according to His purpose” (Rom. 8:28). We don’t know why restoration did not happen in the present, but we have the hope of a God who, through Jesus Christ, will restore Nabeel along with his whole creation. Nabeel, who no longer struggles with cancer, will be raised to new life along with all those who find their life in Christ. “To live is Christ, and to die is gain” (Philippians 1:21).

We mourn the loss of Nabeel. But as Paul also reminds us “we grieve, but not as those without hope” (1 Thessalonians 4:13). We may not have all the answers, but we do have hope.

So why didn’t God heal Nabeel?

Is it because Nabeel didn’t have enough “faith”? People who claim such nonsense don’t know Nabeel or correct theology. Nabeel’s trust in Christ was deep and unwavering. Faith doesn’t guarantee good health and wealth as some “Word of Faith” preachers assert. Nabeel never wavered but remained faithful to the end. Like Job, he said, “Though he slay me, yet will I trust Him.”

Is it because the Muslim God is the true God, and he punished Nabeel for leaving him? Nabeel shared with us that he prayed for healing, lest Muslims interpret his death as a judgement of Allah upon him for converting to Christianity. There may be some who seek to exploit his death in this way. Muslims who suggest this should be asked, “Why did your God wait until Nabeel had written three best-selling books, made hundreds of hours of videos, and helped bring hundreds of Muslims to Christ? Is his timing off?”Not only that, Nabeel’s work will continue to bring people to Christ, probably in an accelerated manner after his passing. I hope that many Muslims will instead reflect upon the faithfulness unto death of a man who was under tremendous pressure to renounce Christ and return to Islam. Thoughtful Muslims need to ask themselves what sort of radical change in a person’s life could result in such undying faith and commitment.

Many Muslims have used Nabeel’s death as evidence that he was cursed by Allah and therefore everyone should ignore his claims. Some of the comments posted are: “Seeking Jesus finding cancer the new book released soon”; “Yes Nabeel’s death is caused by Allah for turning away from him. Look at how he died hahaha.” Comments like these provide opportunity to introduce people to consistency. What happened if these Muslims apply their reasoning consistently to Muhammad’s painful death? Let’s find out…

How did Muhammad die?

After Muhammad and his followers had attacked a Jewish settlement, Khaibar, a Jewish woman whose father, uncle and husband had all been killed by the Muslims offered to cook a meal for Muhammad and his companions. Muhammad gladly accepted the invitation. Here is what happened:

Sunan Abu Dawud 4498—A Jewess presented [Muhammad] at Khaibar a roasted sheep which she had poisoned. The Apostle of Allah ate of it and the people also ate. He then said: Lift your hands (from eating), for it has informed me that it is poisoned. Bishr b. al-Bara b. Ma’rur al-Ansari died. So he (the Prophet) sent for the Jewess (and said to her): What motivated you to do the work you have done? She said: If you were a prophet, it would not harm you; but if you were a king, I would rid the people of you. The Apostle of Allah then ordered regarding her and she was killed. He then said about the pain of which he died: I continued to feel pain from the morsel which I had eaten at Khaibar. This is the time when it has cut off my aorta.

Sahih al-Bukhari 2588—Aisha said, “When the Prophet became sick and his condition became serious, he requested his wives to allow him to be treated in my house, and they allowed him. He came out leaning on two men while his feet were dragging on the ground.”

Sahih al-Bukhari 2617—A Jewess brought a poisoned (cooked) sheep for the Prophet who ate from it. She was brought to the Prophet and was asked, “Shall we kill her?” He said, “No.” Anas added: “I continued to see the effect of the poison on the palate of the mouth of Allah’s Messenger.”

Sahih al-Bukhari 4428—The Prophet in his ailment in which he died, used to say, “O Aishah! I still feel the pain caused by the food I ate at Khaibar, and at this time, I feel as if my aorta is being cut from that poison.”

Sahih Muslim 5430—A Jewess came to Allah’s Messenger with poisoned mutton and he took of what had been brought to him. (When the effects of this poison were felt by him) he called for her and asked her about that, whereupon she said: I had determined to kill you. Thereupon he said: Allah will never give you the power to do it.

At-Tabari, Volume 8, p. 124—The Messenger of God said during the illness from which he died—the mother of Bishr b. al-Bara had come in to visit him—“Umm Bishr, at this very moment I feel my aorta being severed because of the food I ate with your son at Khaybar.”

This is interesting if we are discussing the curse of Allah. Well, in the Qur’an Allah tells us how he would kill Muhammad if Muhammad ever forged the revelation.

Qur’an 69:44-46—And if he (Muhammad) had forged a false saying concerning Us We surely should have seized him by his right hand (or with power and might), and then certainly should have cut off his life artery (Aorta). (Hilali-Khan)

Qur’an 69:44-46—And if he (Muhammad) had invented false sayings concerning Us, We assuredly had taken him by the right hand and then severed his life-artery. (Pickthall)

Now that you’ve seen what the sources say, I encourage you to ask your imam or scholars about the points made here. They’ll give you a simple response: they’ll claim that Muhammad couldn’t have died from the poison at Khaibar because he died a few years after the battle. But this is sheer nonsense. If you eat enough of certain kind of poison it will kill you quickly. But if you eat less than the dose that would kill you, you’ll survive but the poison can do internal damage that kills you more slowly. That’s exactly what Muhammad said happened. He said, “I continued to feel pain from the morsel which I had eaten at Khaibar. This is the time when it has cut off my aorta.” In other words, “the poison hurt me at the beginning; I’ve been in pain for years and now it’s killing me. I am dying of poison.”

How much pain was Muhammad in?

Ibn Ishaq, p. 516—Marwan b. Uthman b. Abu Sa’id b. al-Mu’alla told me: The apostle had said in his illness of which he was to die when Umm Bishr d. al-Bara came to visit him, ‘O Umm Bishr, this is the time in which I feel a deadly pain from what I ate with your brother at Khaybar.’

Sunan Ibn Majah 1622—Aishah said: “I never saw anyone suffer more pain than the Messenger of Allah.”
Aisha saw a lot of pain in her life. She was at the battle of the Camel where about ten thousand Muslims slaughtered each other over a disagreement. And yet she could say that she hadn’t seen anyone going through what Muhammad was going through.